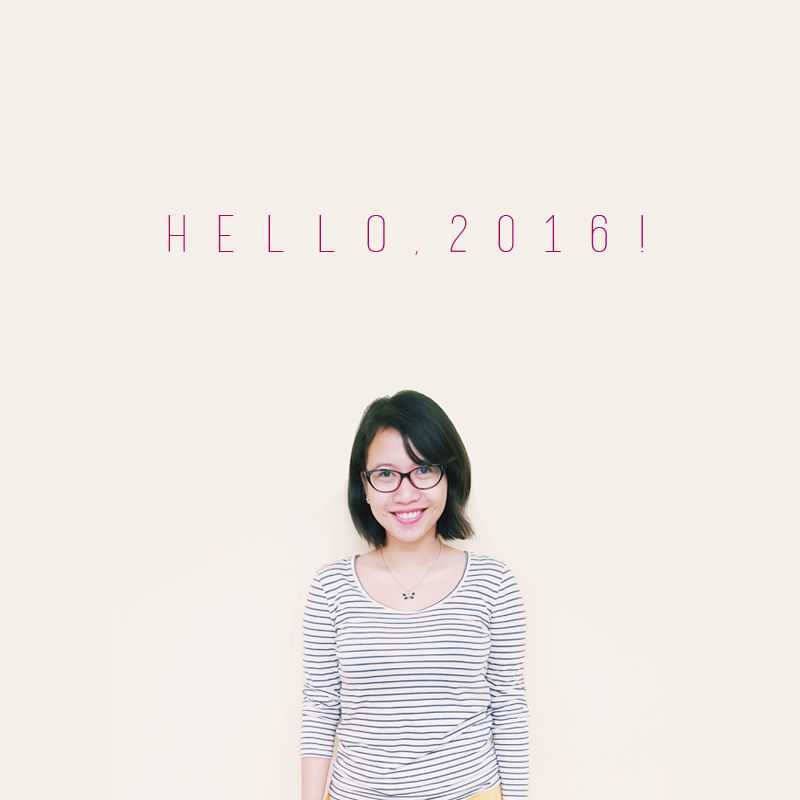 Last year, I didn’t do a lot of things I said I would. In fact, I always come up with a yearly to-do list that ends up being forgotten by the end of February. Reality happens way too fast that I rarely follow through all my plans.

I had a love-hate relationship with 2015. It started with a somewhat laid-back first quarter, a happy-go-lucky middle, and finished with a frustratingly taxing fourth quarter. I have met amazing people this year, new friends I now hold dear. And surprisingly, I have managed to keep in touch with the old ones! I am lucky that I have met people after college whom I can consider as my true friends. Not everyone is so lucky. So I guess I still have a lot of things I have to be thankful for.

2015 wasn’t so bad, but it definitely wasn’t the best. I started a new job, met new friends, started writing for Tripzilla, and gained more pounds than necessary! On the downside, none of my clothes fit, hadn’t written much for Manillenials, didn’t get to travel as much as I wanted, barely had time for anything but work, and very broke. By the end of the year, I was tempted to throw myself a pity party every night, but I realized that I’m too old for that. Instead, I tell myself that this should be a motivation.

2016 needs to be better. I need to be better. It’s all up to me, isn’t it? No more dilly-dallying. No more worrying. It’s about time I stop doubting myself. END_OF_DOCUMENT_TOKEN_TO_BE_REPLACED 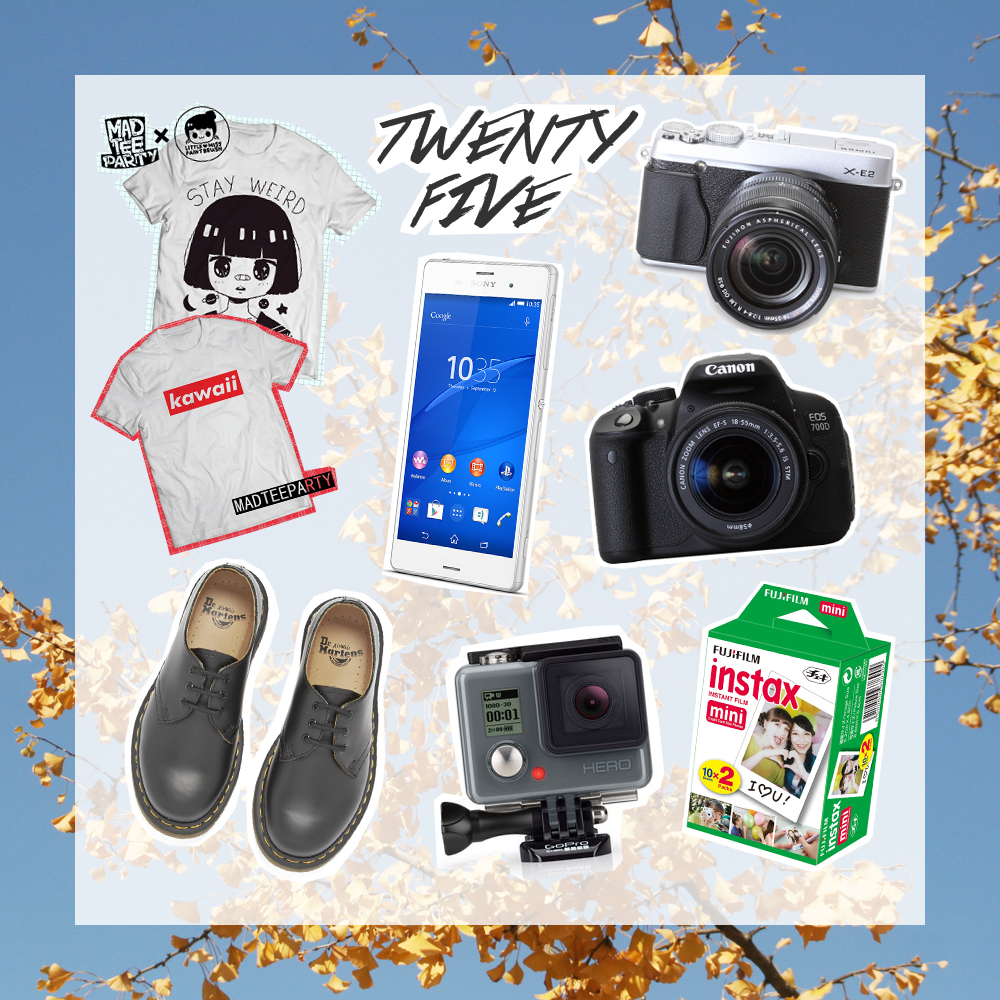 In less than two weeks I’ll be turning 25. I’m excited and nervous and terrified. Truthfully, birthdays don’t always appeal to me. Instead of growing older, I’d rather grow taller. But as I mature (ha!), I learn to accept that it’s not so bad. Not that I’m getting any wiser, but there’s comfort in knowing that I don’t really have to rush anything.

I’m only 25! I have a lifetime ahead of me! Why am I panicking! So I learn to cope and pray for the best, because what else can you do right? (Answer: Do something about my situation, duh.)

Just like every year, I anticipate my birthday with a wishlist. Surprisingly, it’s a lot shorter than my previous wishlists. Maybe because I’m needing less material stuff and leaning more towards the immaterial yearnings of my heart. I’m kidding. I have about three dozen books on my to-buy list, but I have more than 50 unread books gathering dust at home.

I’d also love to get a MacBook Pro, but it’s next to impossible with my salary and non-stop spending. Instead, I’ll ask my lovely officemates to fix my vintage MacBook since they’re IT guys and all.

Now, off to my materialistic wishlist! END_OF_DOCUMENT_TOKEN_TO_BE_REPLACED 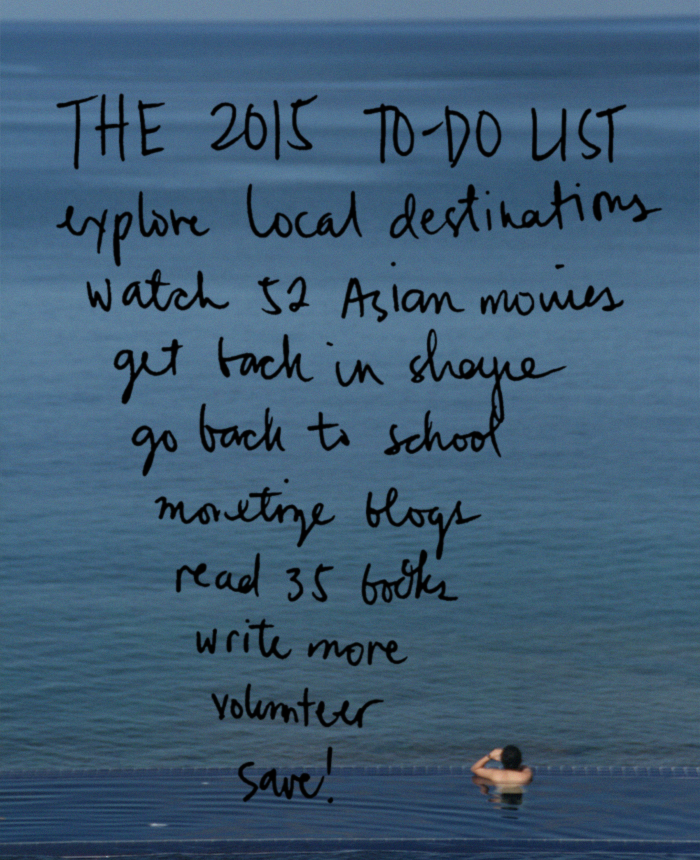 I can already imagine what my sister would think once she sees my to-do list. She’d probably say I should scrap everything on the list and prioritize on getting a better handwriting. Heh.

There are actually many things I want to try this year, such as calligraphy and lettering. But alas, handwriting is one of my weaknesses, and I should just focus on things that I know I can actually accomplish.

2015 is a year of promise, and I cannot wait to fulfill my plans one at a time. I will definitely struggle, and even for that, I cannot wait. I am often deluded into wanting too many things at once, and end up accomplishing too little. This year, I’m trying to dream less but bigger. I don’t want to feel rushed, and I have to constantly remind myself that everything will turn out fine—in its own time.

I’m pretty sure that I can accomplish most of these goals this year, if only I’ll learn to focus and to stop procrastinating. Also, to stop watching MasterChef everyday.

And it is turning out great, mostly because my vacation was extended for another week and on the brink of another more. The past week has been a great time to unwind from the chaotic holiday season and to think things through. I managed to lay out my  goals for the year and to visualize a 6-year plan.

I’m excited because this is the first time I’ve thought so far ahead. I’m just often planning what to watch during the weekend. It was almost unheard of to plan what I want to do for the next year! But 6 years? I just hope I’ll be able to pull it off. It won’t see the light of the internet, though, because it’s way too personal. I’m trying not to prove some people’s claim that my life is an open book. HEHEHE.

So here are my 2015 goals! I managed to cut it down to only nine, which is an accomplishment in itself. END_OF_DOCUMENT_TOKEN_TO_BE_REPLACED 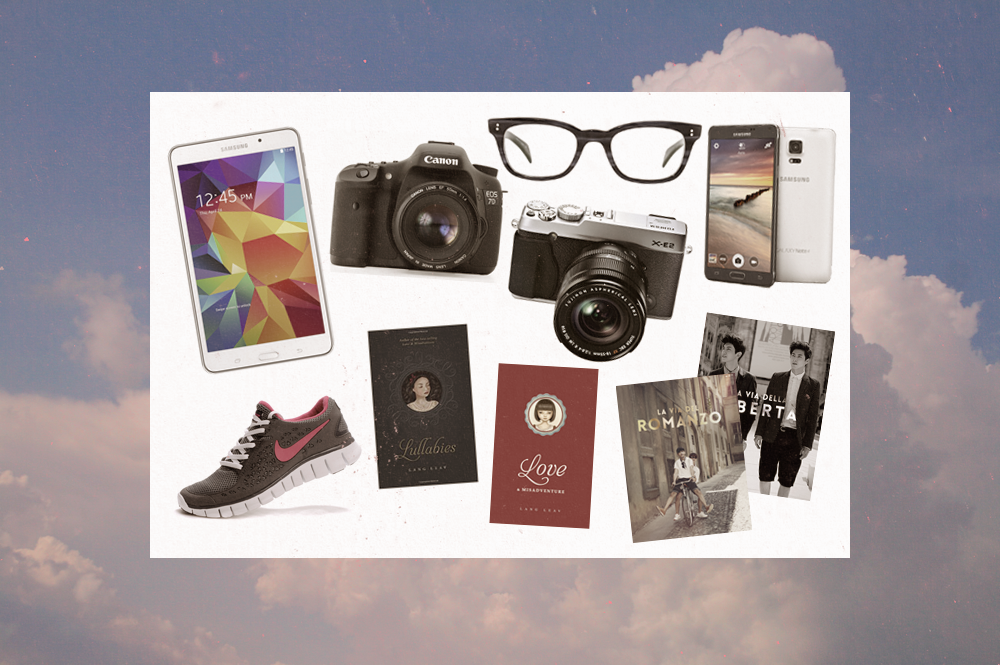 This might be the shortest wishlist I will ever write, but it doesn’t mean it’s the cheapest!

I came up with a timeline of my upcoming expenses in 2015. Basically, I have plotted out when I’d buy everything on this list. Just thinking about it made me wonder if I was thinking sane. At this point, I’m starting to think I won’t be able to afford anything on this list. But hey, there’s nothing wrong with hoping/planning, right?

Financially, 2014 has been incredibly difficult (what year wasn’t?!).  Maybe it comes with age, maybe because I really don’t know how to handle my money. But money comes as quickly as it goes. One minute it’s the start of 2014 and I’m figuring out how to save more, the next it’s the end of 2014 and I’m struggling more than ever. Then again, I’ve always been an impulsive buyer.

On a more positive note, I’ve crossed out quite a lot from my birthday wishlist! Oh, so that’s where my money went! END_OF_DOCUMENT_TOKEN_TO_BE_REPLACED 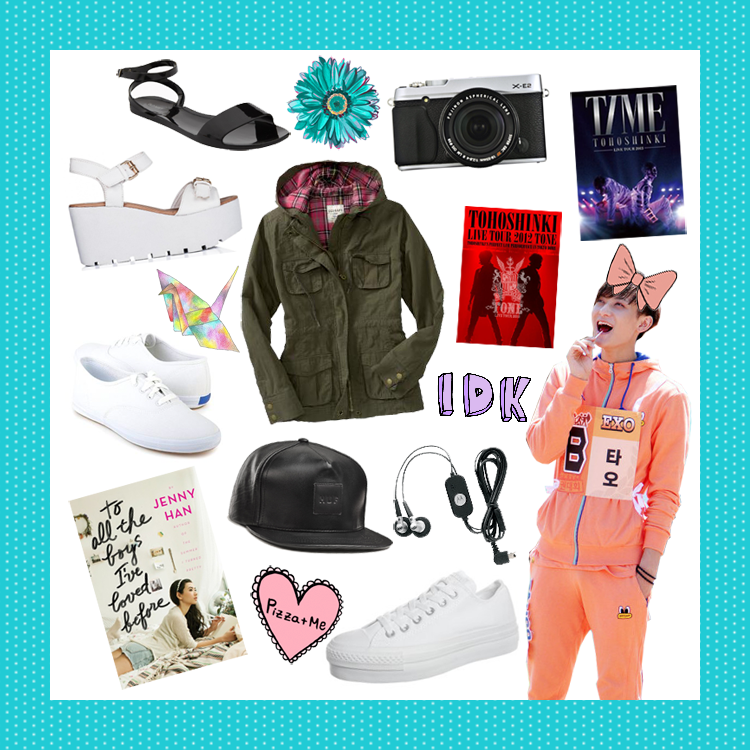 This is the first time in years that I didn’t post a birthday wishlist before my birthday. I know, such a shocker! Good thing it’s still my birthday so I’m totes allowed to still post a wishlist even though I should be working on other things such as my Seoul backlog. Anyway.

I’m not sure what happened that I’m suddenly interested in anything white. I guess it just looks clean and looks great with everything. Or maybe I spend too much time on Tumblr style blogs. When I was a bit younger and had more sense (yes, it works backwards for me!), I don’t wear anything white. I loathed my all-white high school uniform and never considered going to a university that will require me to wear a white uniform. Pretty much the only reason my mother couldn’t convince me to take up Nursing, hehe. I’m messy, disorganized, burara.  I recently bought a white leather backpack that has now turned creamy. Wearing anything white is a no-no. But it’s so pretty I can’t help but want to.

I think the only reason I put the other items on my wishlist is so that the photo above won’t look too plain. Ahem. Off with the list! END_OF_DOCUMENT_TOKEN_TO_BE_REPLACED