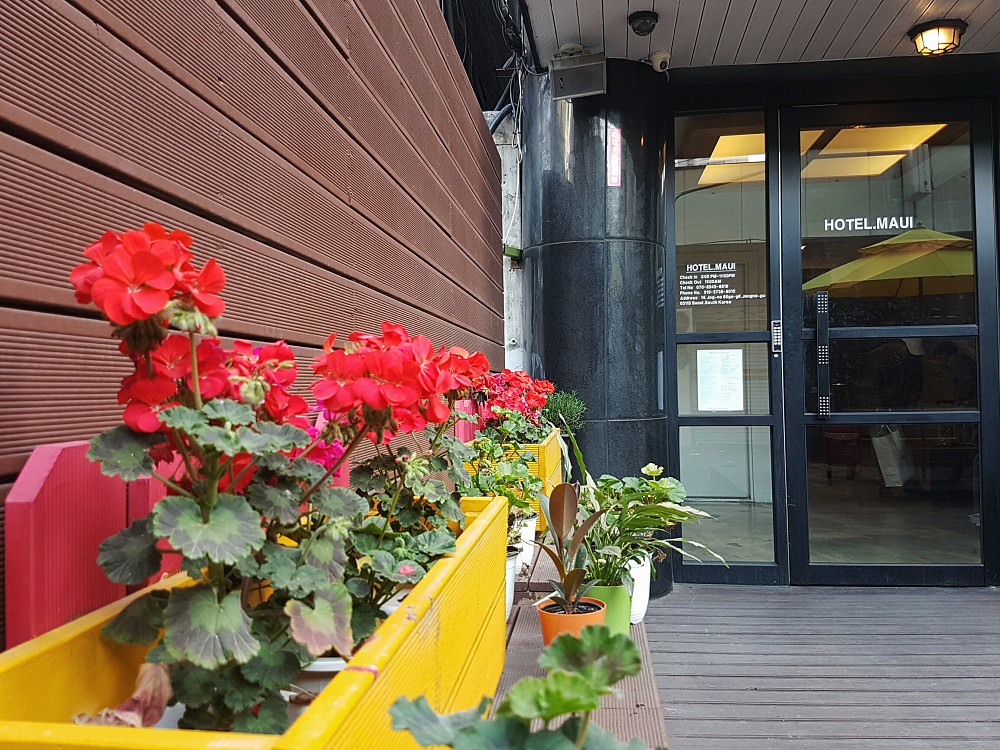 After two long years, I was finally able to go back to Korea and fulfill my Kdrama dreams. I’m pretty you can imagine how happy I was to be back. It was my fourth time in Seoul, and instead of staying in the same hostel, I decided to try a new budget hostel in the middle of the bustling city. There are tons of affordable accommodations in Seoul, and I’m glad my sister and I ended up staying in one of the bests!

Hotel Maui in Dongdaemun is relatively new, but I have to say that they definitely set the bar when it comes to budget accommodations. It has everything I am looking for in a budget hostel and then some. Seriously though, they offer quite a lot more than the other accommodations stayed in did.

How do I even start raving about this hostel? From the location to the rooms to the host to everything–we loved every minute we spent in it. END_OF_DOCUMENT_TOKEN_TO_BE_REPLACED

Having a film camera is something that I’ve desired for quite some time now. So when Ensogo offered an Waterproof Lomo Camera for only 429PHP last May, I grabbed the chance as fast as I could. Since it’ll be cheaper to order the assorted set (3 cameras in three different colors), Ate Karen and Marj and I just decided to share the payment.

We sent Ensogo multiple e-mails, with complete details of our payment transaction, saying that we didn’t receive a confirmation e-mail of our payment. But did we receive a reply? No. Then we sent some more and still received no reply. Then we sent another one through here, thinking that maybe our message would have a greater chance to be noticed. And still, we didn’t receive any reply. Oh, we tried calling, too. We called a lot of times and they happened to not pick it up.

The start of the shipping date was on the 4th of June. That day, Ayessa received her camera. The three of us didn’t. Then we worried even more.

Ate Karen once again tried to call Ensogo and finally, they answered. They didn’t give us an explanation on what happened, why they ignored our messages. They just kept saying sorry. But they did say that our payment didn’t register. They said they’d do something about it. We waited for them to do something about it. But did we receive our cameras?

NOOOOOOO. The last day of shipping (July 4) came and went, and the cameras didn’t come.

If we didn’t call to inquire about it, would we be informed that our cameras won’t be delivered? Or are they hoping that we’ve long forgotten the cameras? Because if they have known long before that the cameras were defective, then we should have been informed early on that we shouldn’t expect anything, that they couldn’t make the deliver. And I guess they didn’t inform the customers about the unshipped cameras so they do not have to refund it. Yes, it’s just a silly assumption. But they’re not offering any explanation and not making any efforts to make up for it, so I’ll continue making assumptions. Thank you very much.

They said they’d just refund it, but what ways did they offer for our cameras to be refunded? They wanted us to go to their office personally and present our deposit slip. REALLY? We even have to make that effort? HA!

Yes, I wrote this incredibly long post because I felt as if I’ve been robbed off my 429PHP. But it’s not just that. A part of me no longer cares about that 429. A greater part of me is pissed because they let us wait, they let us pine on our dreams of having our own film camera. We made some efforts (half-hearted they may be) to go to the bank to pay, to send e-mails to complain again and again, to call their office a couple of times. And what do we get in return? Some half-assed apology.

Frankly, the main reason I’m pissed is because they ignored our e-mails. Would it take so much of their free time to reply to at least one of the tons of e-mails we sent them? My pride was hurt, okay!

So yes, I wrote this impassioned blog post for a petty 429PHP. You know what I could buy/afford with that 429? A paperback from National Bookstore, 8 books from Book Sale, a meal for two, a freaking full-body massage, a 10” pizza from Yellowcab, tons of clothes from an ukay-ukay, and a bunch of other things! See? That 429PHP isn’t that cheap. That’s 8 meals from a Jollijeep, already! Also, we ordered a set so multiply that 429 three times and that’s how much we paid. Argh.

And if you want to know more how messed up their service is lately, read this.

I don’t know much about running a business and as a customer, I have only paid for 3 vouchers from Ensogo. But I do know that it’s their job to inform their customers if the shipment wasn’t made. It’s their job to make sure that the customers weren’t displeased. And if the customers are already displeased, then they should at least make some efforts to appease them. Sadly, Ensogo failed to do all that. It may be okay to avail vouchers for meals, services, etc. from Ensogo, but when it comes to products? I don’t think I can trust Ensogo again.

I may be just one customer, but if Ensogo won’t get their shit together, they’re about to lose more.

It’s one of my goals this year to read more works by Filipino writers. Though I have yet to fully indulge myself in Filipino literary goodness, I started the year right by allotting a weekend to read Trese, a komiks created by Budjette Tan and Kajo Baldisimo. I am quite late into getting into the illustrated novels since it’s been around for a few years. I only learned about the graphic novel when they released the fourth book last year. I wanted to buy it immediately but I know that I have to read the first books before that. Sadly, the time I inquired they only had the fourth book. I had to wait for a few weeks before National Bookstore re-released copies of the first three books. But since I was a cheapskate, I only bought the first book.

The first book, Trese: Murder on Balate Drive, introduces the reader to Alexandra Trese, someone who obviously knows how to deal with supernatural crimes. She’s the one person Captain Guerrero contacts when an unusual case pops up. The first book only gives a glimpse on the true nature of her job and shows very little background of how Trese ends up with the job. There are four stories in the book, and once I finished the last one, I regretted not buying the three other books at the same. It’s so easy to read, something you can devour for an hour or so. It’s something you’d end up reading in one seating because it’s really engaging.

END_OF_DOCUMENT_TOKEN_TO_BE_REPLACED

I got a little lazy last month and only read four books. It was a good reading month, I wish I read another book but I somehow feel like I’ve been reading too much. You know what I mean? But I swear I’ll get back to reading soon! I have bought seven books from various book sales last and I should get started on those. Also, I started my Harry Potter reread. I doubt I’d finish the seven books by July.

1. Looking for Alaska by John Green

So how do I even begin to describe this book? I have conflicting feelings about it. I love the characters, I love their intricacies. I love how smart they can be and I love how they can be so deep. So deep that I sometimes raise my eyebrows. I believe I do not understand many of the characters at all. I often think, was I like that in high school? I hope not.

You see Looking for Alaska is a really good book. The prose is awesome, a lot of pretty words derived from these supposed smart and “deep” characters. But though the plot is exciting enough, I don’t like it that much because I just don’t get Alaska at all. I don’t get why people fall in love with her. I don’t get how she could be a good character. I do not like her, but her flaws are the reason why we a have a story. Maybe I could have given this book five stars but my feelings for Alaska clouded my judgement. I cannot fully love a book when I hate the lead so much. Not just Alaska, too. I do not like Miles. He is okay at first then he got overly emotional and hormonal. But I love the secondary characters, Colonel and Takumi. They salvage the somewhat overly dramatic plot.

Will I read this book again? Maybe. Do I recommend you to read it? Yes. Because it has beautiful prose and so pretty words. And it’s though-provoking and it’s never a waste to read a book that will make you think. END_OF_DOCUMENT_TOKEN_TO_BE_REPLACED

To tell you honestly, I am quite  not sure where I found the time to read seven books in a month. When I look back at March, I realized that I actually went out a lot more than usual. (I’m a homebody, remember?) Maybe it’s because I read three thin novels that’s why I managed to read 7. I told you I pretty much have all the time in the world. I love my job, I can do anything I want after work hours. Anyway, even though I’ve read two books more than usual, I still can’t say March is a good reading month. The books I read for this month didn’t evoke that much emotion from me. Heh. END_OF_DOCUMENT_TOKEN_TO_BE_REPLACED