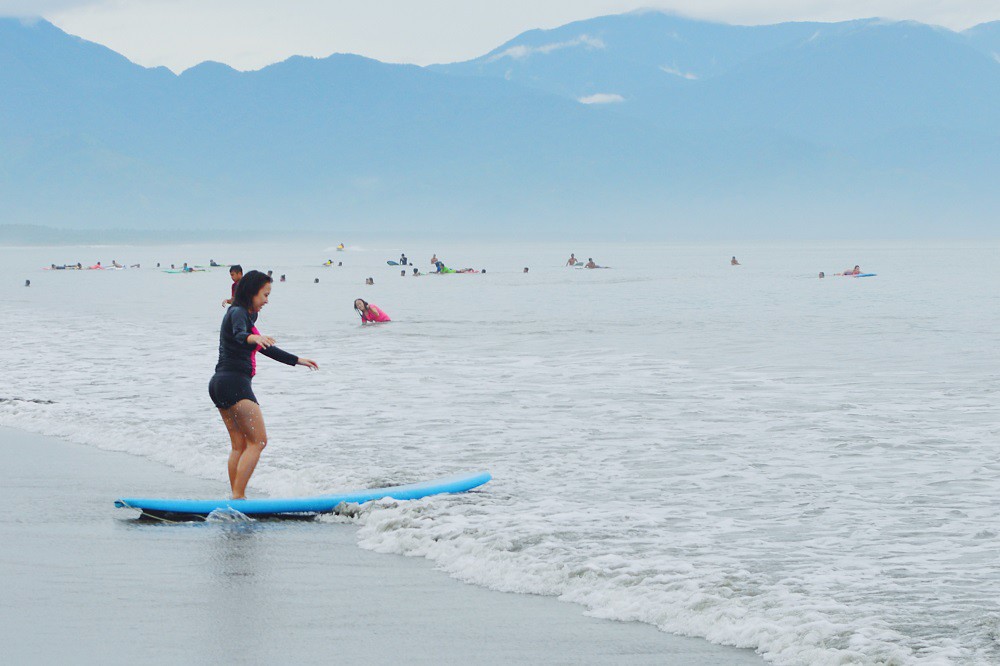 Surfing was never in my bucket list. Not once did I imagine myself learning how to surf nor did I ever wish to be good at it. I couldn’t even balance on a bicycle. How could I balance on a surfboard? But surfing in Baler last weekend taught me that we surprise ourselves sometimes.

When my friends started planning a trip to Baler, of course I wanted to go! But did I want to surf? Not so much. I couldn’t even swim—why would I dream of actually surfing?

Upon arriving at our accommodation in Baler, I could easily see from our balcony the dozens of surfers riding the waves. I was surprised to see that the water wasn’t too deep, and waves suitable for surfing were actually near the shore. That’s when I started thinking that maybe I can do it.

The morning that we were supposed to surf, I was still unsure whether I’d give it a shot. But I realized that it was now or never. If I couldn’t conquer my fears then, I’d never learn to do it nor have the courage to actually try. So I dragged my heavy and nonathletic body to the shore where the tall surfboards were waiting for me.

It was the most terrifying and exhilarating activity I have ever tried. Despite falling off my board a million times, I cannot wait to do it again. In the midst of the waves crushing me, I ended up fishing for a lesson or two or ten. 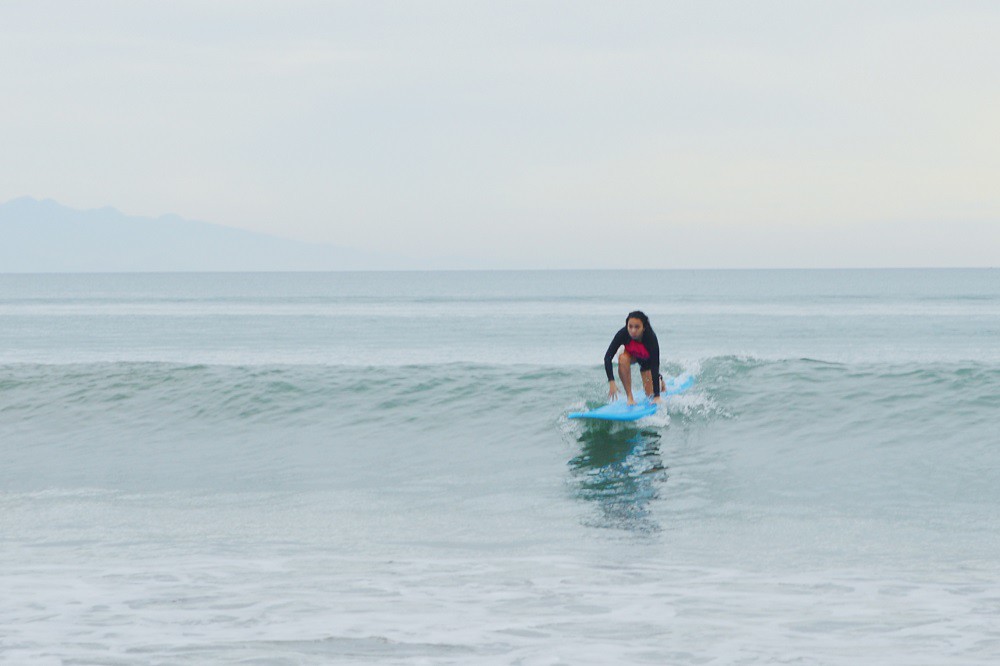 Some things are worth waiting for.

We were already waddling on the water for a couple of minutes, and still, no big waves came. He said we’d have to wait, and I knew then that waiting for the right wave could affect my surfing. Since I was a total newbie, he had to guide me all the way. This included telling me when to get ready and pushing my surfboard to follow the waves.

It’s all about timing. too. So when the big waves come, you’ll be waiting, and you’ll definitely be ready.

Don’t fight the waves—just learn how to face it.

I am no swimmer. But seeing that the water wasn’t too deep, I realized that I probably wouldn’t drown even if I fell in it. This doesn’t mean that the gigantic waves that weekend weren’t enough to bury me underwater.

The waves were always taller and stronger than me. At first, it would beat me down, and it would take a couple of minutes and a couple more waves before I could stand on my feet again. After seeing me struggle to keep up with the waves, Joshua taught me how to brace for it.

Fighting the current should be the last thing I do. Letting the waves carry me or going underwater are the best ways to do it. Pretty much the same in life. You don’t need to butt heads with your problems. You just need to find your way around it. Just go with the flow until it can no longer control you. 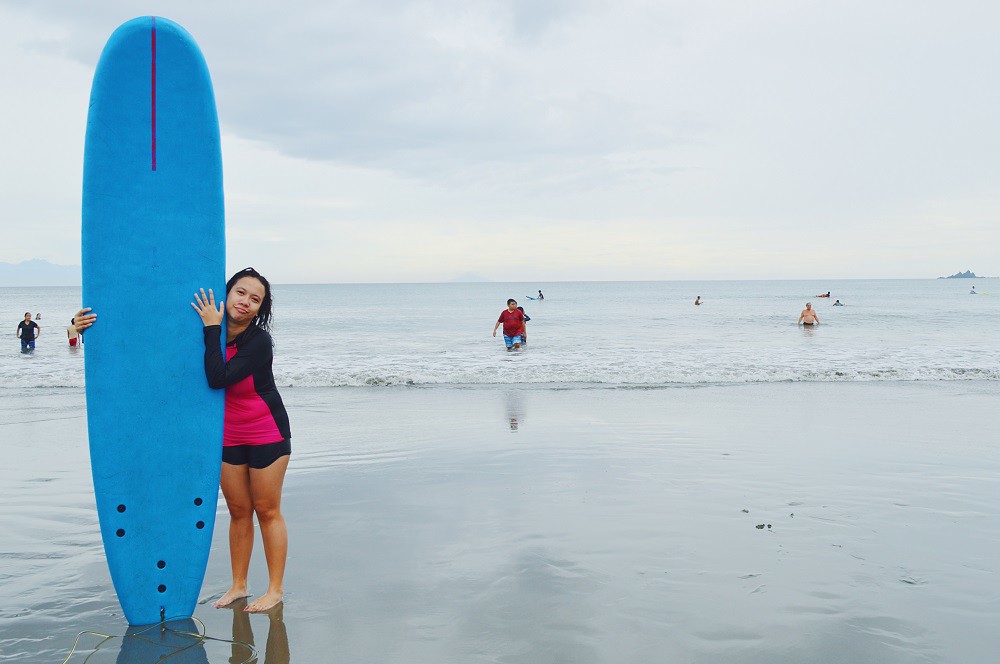 Try to find your balance before you jump ship.

“Ma’am, mas inuuna mo pang takpan ilong mo kesa mag-balance,” shouted my instructor as I dragged my board back to him.

I just laughed at his words, but I knew that what he was saying was true. I was so sure that I’d end up falling that instead of trying to salvage the situation, I go straight into trying to save myself.

Instead of trying my hardest until the very end, I jumped the moment I knew I was in danger of tipping. Because of this mindset, I got wiped out way more than I could count. Because I was too focused on trying to save myself, I forgot to try to surf first. I was consumed by the waves only because I let it.

We all have our balance—we just have to find it.

After falling in the water for the millionth time, I exasperatedly said, “Wala talaga akong balance!”

Joshua disputed my words and said, “Lahat tayo may balance!”

I mean yeah, I do have some outstanding balance left in my credit, but I couldn’t balance to save my life. Even before I started surfing, I knew that balance would be my biggest issue. That’s why I never learned how to ride a bike.

But yes, yes, he is right. Striking the perfect balance in everything we do is pretty much our best shot at excelling, isn’t it? Definitely, it won’t be easy, but we can’t just give up in the middle of our hard work just because we cannot balance.

How could I possibly give up after failing at standing on my surf board dozens of time? If I gave up then, my bruises and aching muscles wouldn’t be worthwhile. 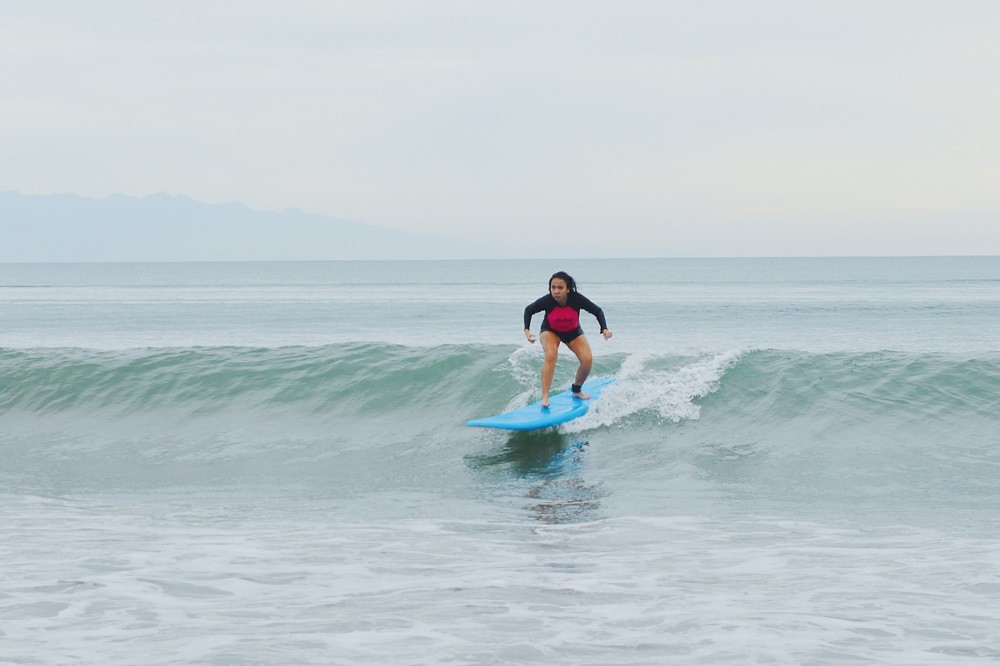 Don’t stop at the little achievements. Always aim for something bigger.

After finally standing on my board for longer than two seconds, I was ecstatic. I was grinning from ear to ear. It already felt like I achieved something.

I was excited to return to my instructor to gloat. But the moment I was near enough, he was already saying, “Ma’am, anong nangyari?! Balance, ma’am!”

It was easy to get mad and storm off. But I knew that he was just being hard on me because he believed in me. He believed that I could pull it off, that I could do better. I couldn’t settle for that little accomplishment because better things are yet to be achieved. If he believed in me, why wouldn’t I believe in myself?

Do not spend so much time being in awe of someone.

While resting, I watched other students surf effortlessly. Less than 30 minutes in, my friends were already standing on their boards. I was mad jealous!

It was a simple reminder that it’s okay to admire and be motivated by someone, but we shouldn’t stop at that. There must also be a conscious decision to try and be better. In due time, we’d be as good or even better than the ones we admire. 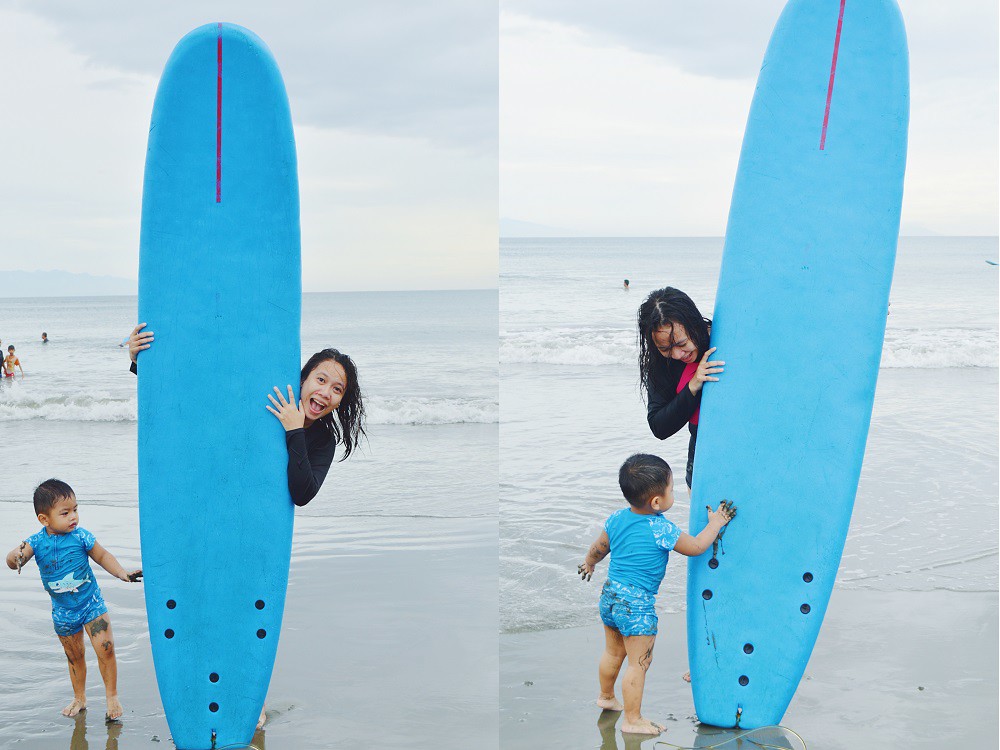 Only you can stop yourself from doing anything.

During my first few tries, I could barely lift my legs. I was so terrified of falling head first in the water and breaking my bones in the process that I was hesitant to move. I screamed first, tried to surf after. Then my instructor reminded me to just look straight ahead and do not be afraid. So I ended up leaving my fears behind and falling as often as possible.

According to Joshua, the goal for newbie surfers is to successfully reach the shore. That time, his main goal for me was to learn how to stand on my board. But after hearing this goal, I was determined to get back on my board and try it. I won’t leave the water ‘till I succeed, I thought.

I immediately climbed on my surfboard and waited for his instruction to start. I was so immersed in my thoughts to succeed that I missed my chance to stand on my board. I ended up zooming my way to the shore while I was still planking on my board. It was chaotic as people had to get out of my way as I screamed my way to the shore. I almost couldn’t face my instructor after!

Moral of the story? Do not daydream while surfing. I did better after that horrifying bluff, though. Also, I managed to reach the shore so I at least met the newbie goal. I win.

You can learn from anyone—even from someone 10 years younger than you!

Joshua is only 16 years old and he’s already teaching a bunch of grown ups how to surf. He was the one who did the demo at the start. Judging by his confidence and know-how, you wouldn’t guess he’s just 16! I knew he was young, but when he asked me to guess his age, I answered 19. Apparently, he’s much younger than that. Then I told him I was 25 because I forgot that I already celebrated my birthday. Haha!

It was awkward at first because he couldn’t stop calling me ma’am, and I couldn’t stop saying ‘po’ and ‘opo’ despite knowing I’m a decade older. But he is a pretty amazing teacher, and obviously, I learned a lot from him and not just about surfing. 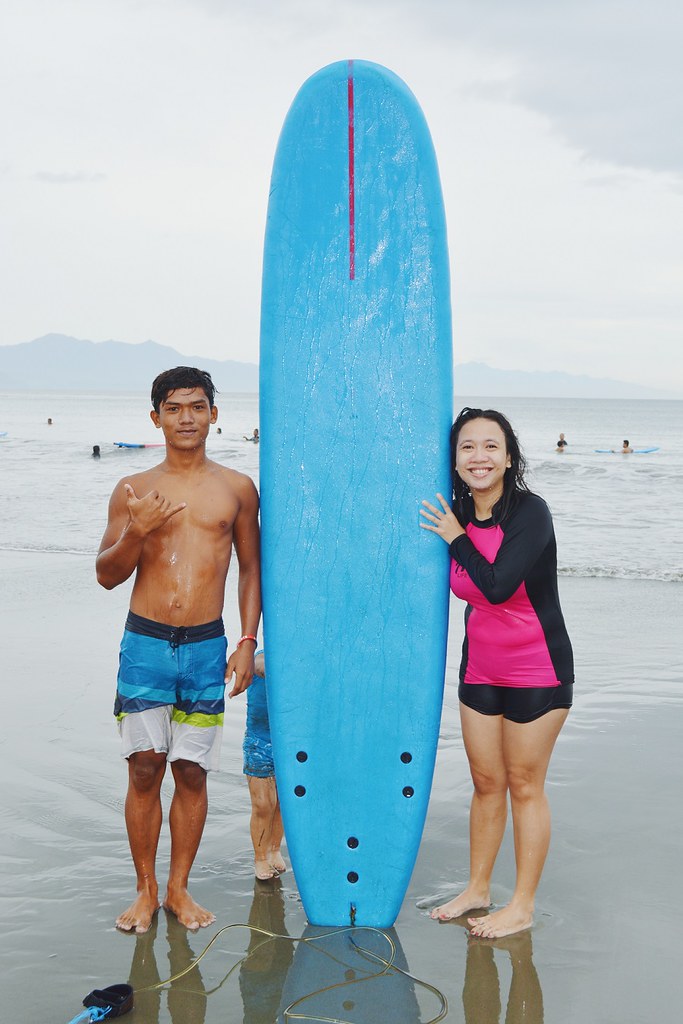 With Joshua, my surfing instructor 🙂

As my friends posed for picture at the shore, my instructor and I tried to sneak in a few more tries before I return my surfboard. But until the very end, I was hopeless!

Basically, I didn’t manage to surf. I managed to stand on my board, but that’s different! After more than an hour of struggling, falling, almost drowning, and dying trying, I still didn’t surf, in the literal sense of the word. I still didn’t get to ride the waves, and I have only managed to glide for a few seconds.

My instructor didn’t want me to stop trying, but we didn’t have enough time. I was exhausted and bruised all over. I could barely keep my head on top of the water. I knew he was disappointed, and so was I. I tried my best not to disappoint him, and I desperately wanted to feel the rush of the surfing. But alas, it wasn’t my time. I was quite disheartened, but I am more that thankful for the experience.

For a few seconds, I managed to feel the rush of adrenaline, the feeling of floating on water, the ecstatic thrill. It’s enough to make me determined to go back and try again. And this I can tell you, I will. 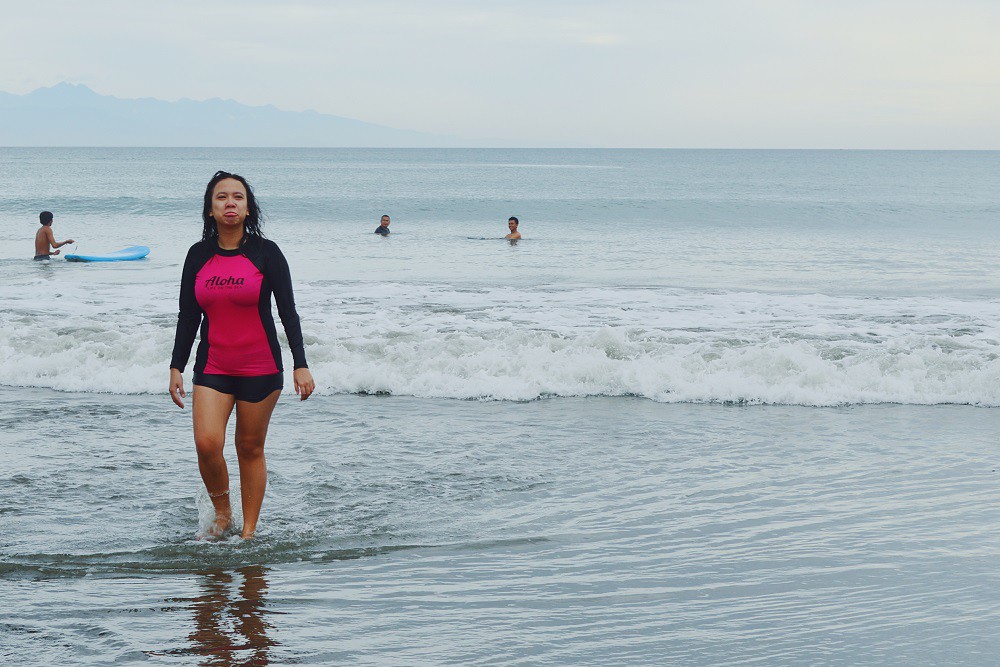 Me, after being wiped out a hundred times

Where to surf in Baler

We stayed at S.M.A.R.T. Beach House along Sabang Beach, and it’s also where we got our surfing lessons. Because there were eight of us, we got a discount! We only had to pay PHP 275 each for an hour of surfing and instruction.