For our second day in Vietnam, we went to Halong Bay! It wasn’t part of the plan because it’s supposedly very far, but the travel agency gave us a really good discount. Besides, it’s apparently the number one destination in Vietnam, said the travel agent. It’d be a pity to pass up the chance.

Apparently, it is also veeeeery far from Hanoi. And when I say far, I mean four hours to and fro Halong Bay! Yes, we were on the road for a total of 8 hours that day, and my butt seriously hurt. REALLY HURT. But you know, it was worth it. Thank you dear travel agent from convincing us to take the Halong Bay package. 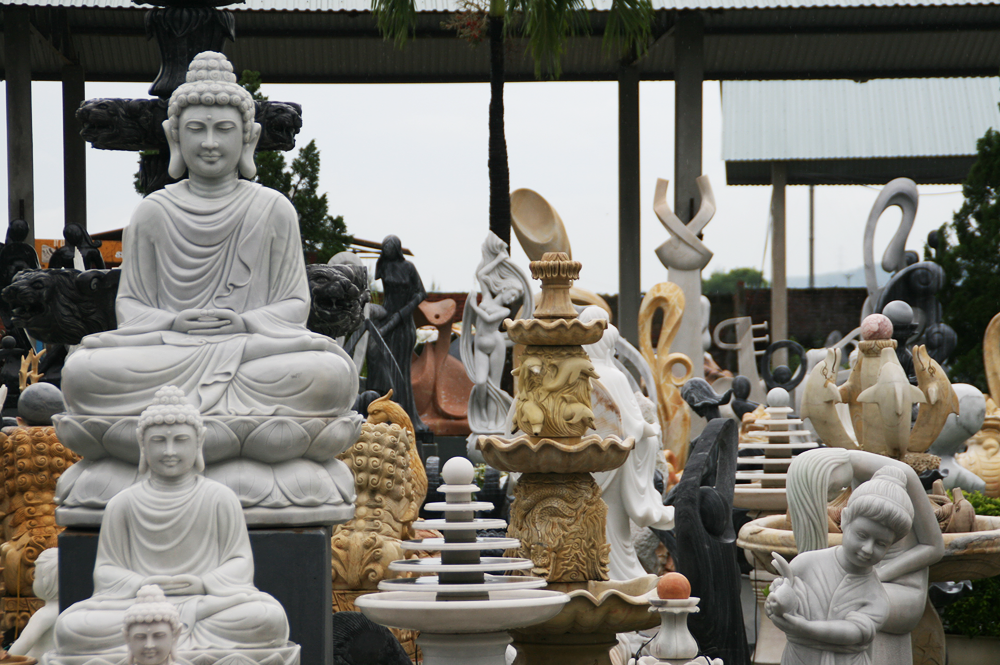 Jinky and I were part of a tour that’s entirely Japanese. Seriously though, we’re the only Filipinos and the rest were Japanese! Our tour guides was also separate from theirs. So it was weird that Jinky and I had a separate tour guide. It somehow felt like we should have paid more. Felt so exclusive! Hehe.

It was drizzling when we reached Halong, so I was a bit afraid of what we’re about do. After all, we would ride a boat, a big one but it’s still a boat. I don’t know how to swim! It’s just really lucky that it really didn’t pour. It was gloomy the entire time but not that nauseating enough to be  crazy to be out in the sea.

The first thing we did when we got on the boat was have lunch. It was part of the package and I’m telling you now that it’s my favorite part of the trip. Wehehe. The food was amazing! We shared the table with three Japanese teachers, and they were kawaii! We also spent most of the trip with them.

After lunch, we were free to go up on the deck and have a better view of Halong Bay. It also stopped drizzling by then. I’m not sure what I expected, but it really wasn’t that different from the photos. However, it’s difficult to take photos because it was cloudy one minute, sunny the next. 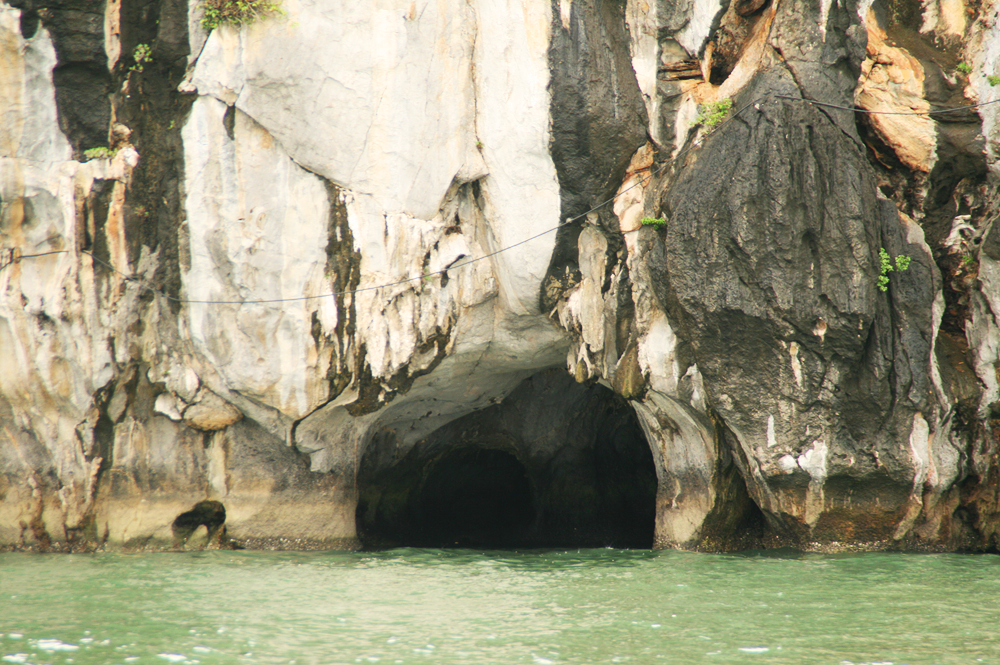 The view was awesome despite the gloomy weather. The tour guide pointed to one island (?) that appears on the back of Vietnamese dollar! I just can’t remember which bill. I’m sorry, I’m not very informative. Hehe. But the view on the picture above appears on a bill!

After a few more minutes, we arrived in a floating village. It’s amazing how in the middle of Halong Bay, there’s a subsisting village. They have electricity, mode of transportation, a school, everything! It’s a functional community altogether! They do depend on tourists for more source of living  such as boat renting. 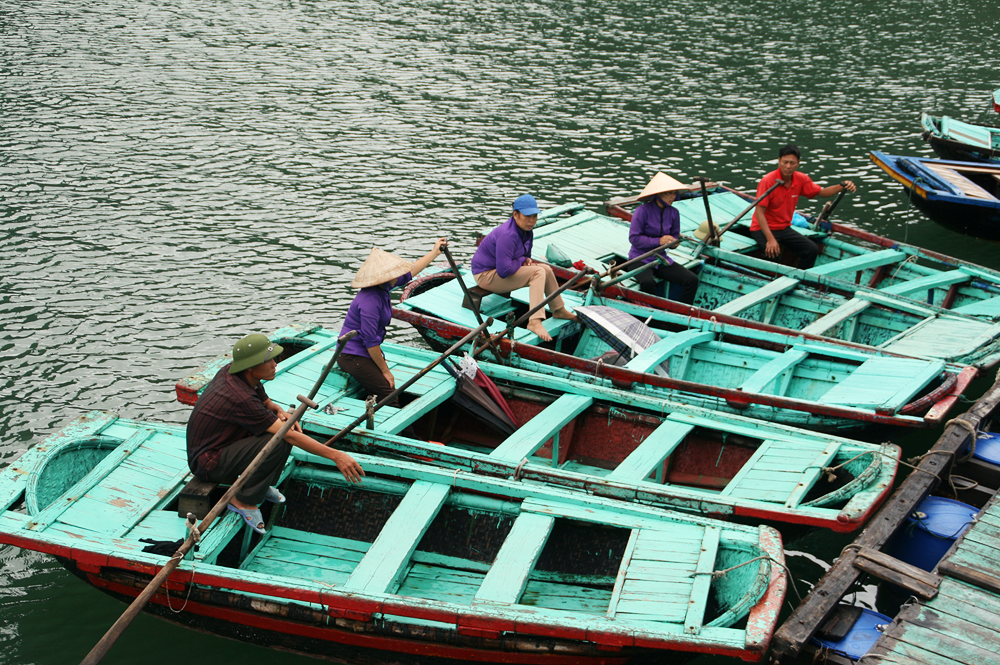 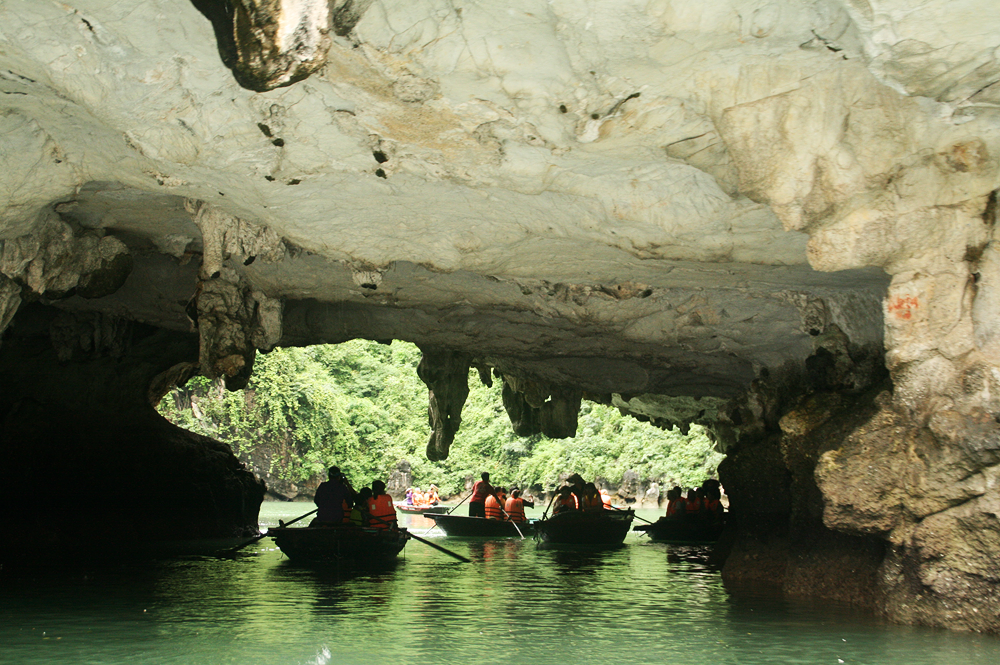 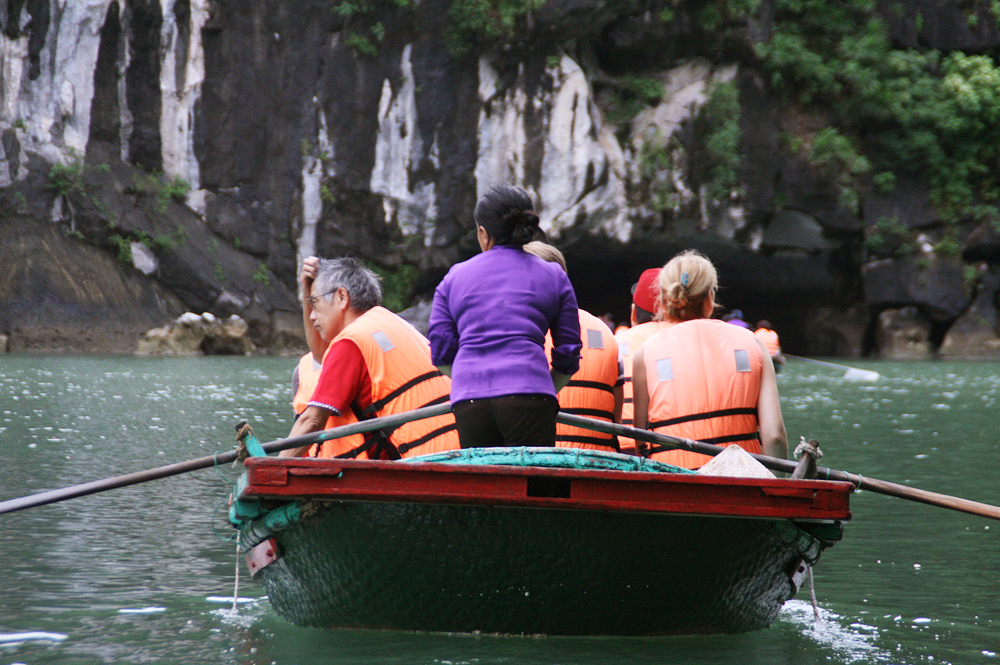 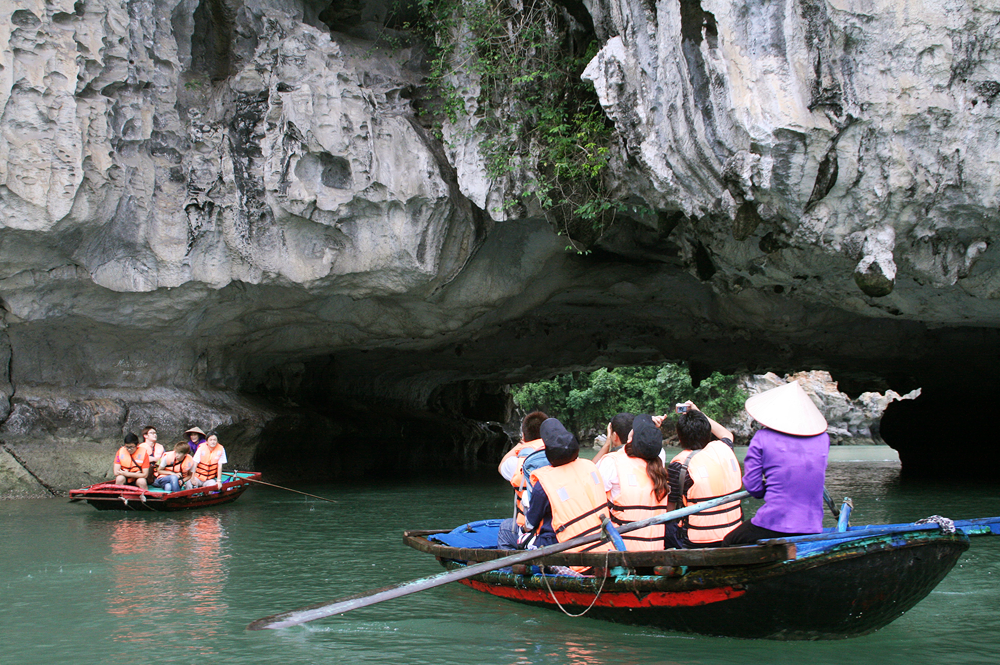 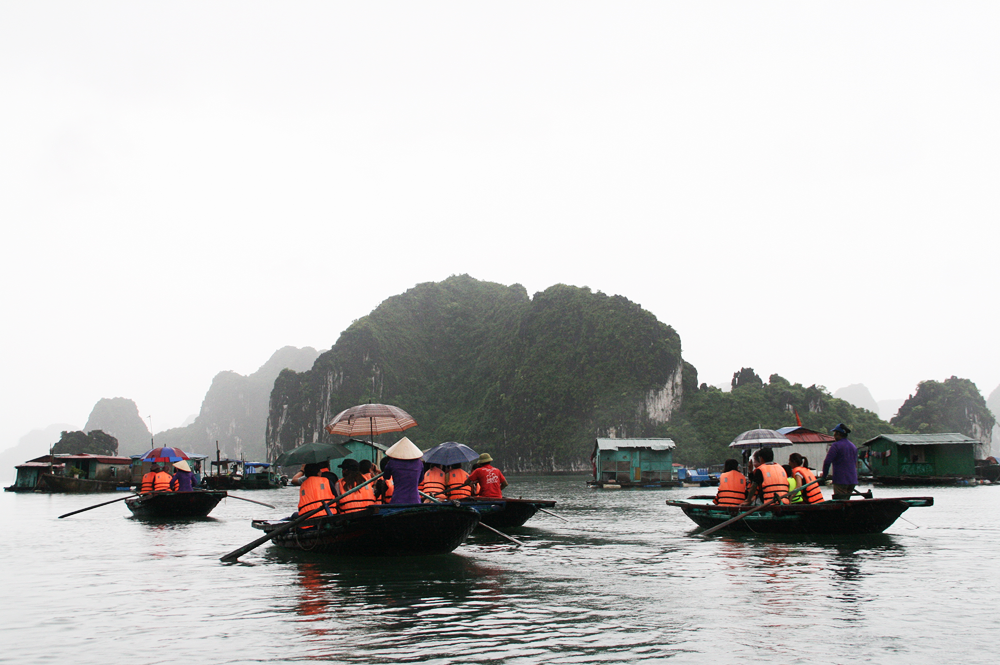 We had the choice of kayaking which was part of the package or riding the bamboo boat (that’s like a huge basket!!!) but we had to pay extra. We were pretty sure that we’d go nowhere when we ride the kayak, so we choose the bamboo boat.

Jinky and I shared a boat with our three Japanese friends, and we were rowed by a female local who’s stronger than the five of us combined! Seriously, the local women who were rowing the boats were so strong that it’s a wonder how they manage to do it. Each boat carries five people. Just imagine how heavy the total weight is if all the five people are male!

We entered a couple of caves and went inside amazing coves. It was overwhelming because we were suddenly surrounded by monstrous isles. I just can’t explain it, but I was so awestruck.

On our way back to our big boat, it started drizzling. I almost panicked because 1.) we were on a small boat and 2) I didn’t know how to swim! Good thing it didn’t really pour. It was just enough for the boatman to pull out some umbrellas and let us use it. It is not always that I’ll be riding a boat while it’s raining and while I’m holding an umbrella. Heh. 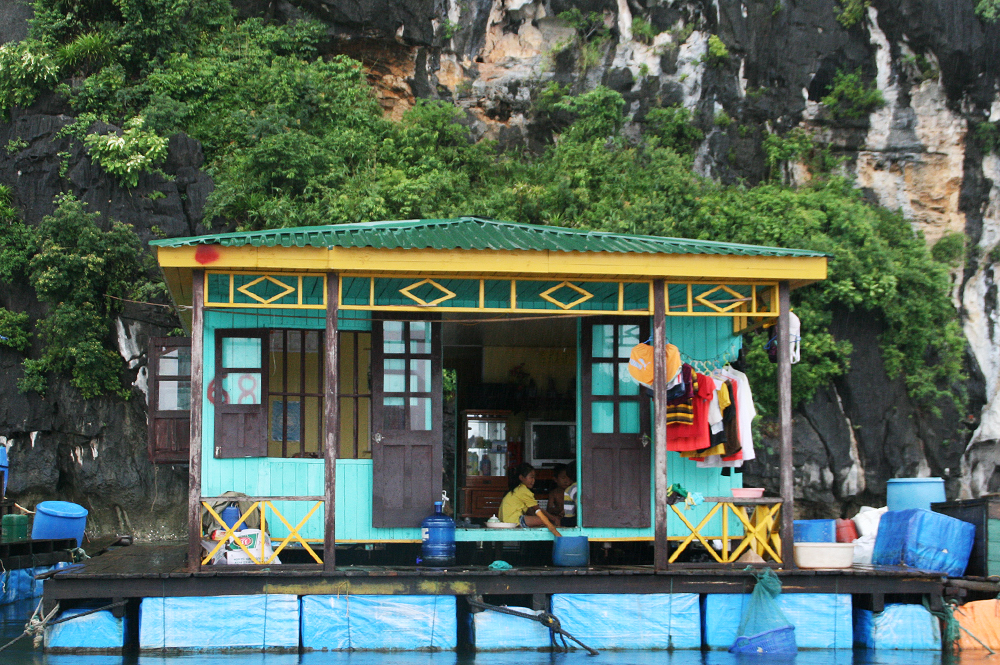 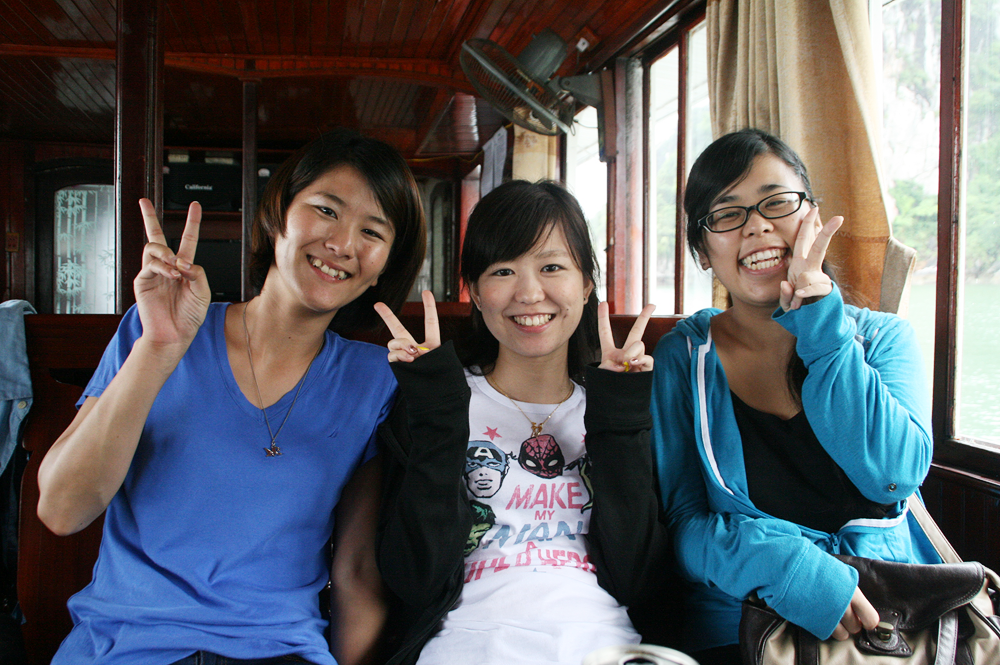 When we got back on the boat, they took away the food but left our refreshments! They were pretty considerate. They probably knew we’d be thirsty after that boat ride in which we didn’t do anything. Ha. 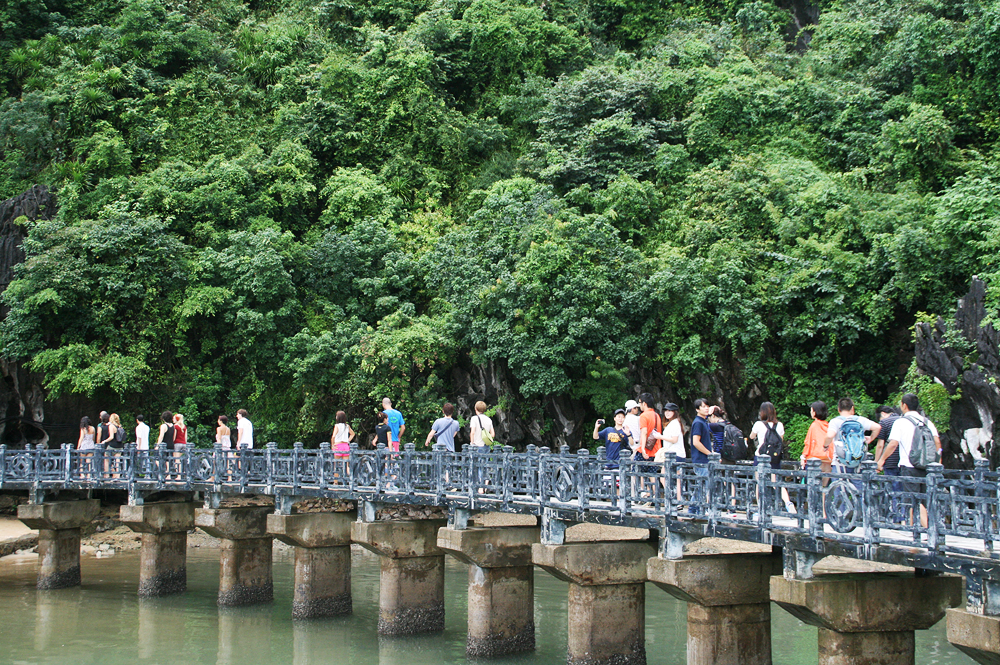 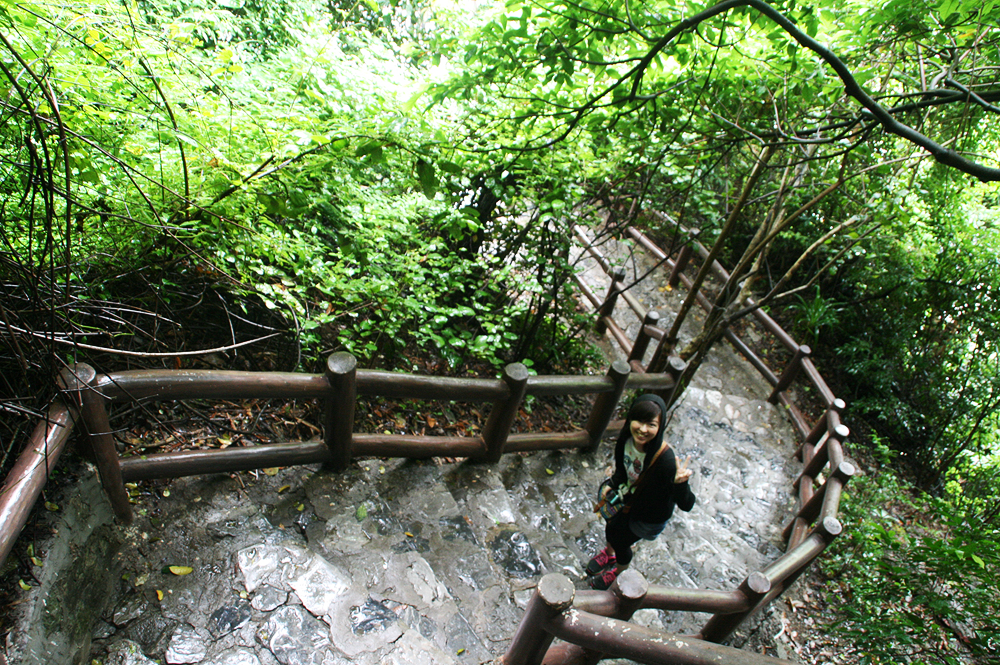 It would have been impossible to take photos inside, but whoever’s in-charge of tourism in Halong Bay did a pretty good job of lighting up the entire place. I was incredibly wowed at how they managed to preserve the place and promote tourism at the same time. Seriously, this is ecotourism at its finest! It’s incredibly well-managed despite the thousands of people who frequent the cave everyday.

Our tour guide pointed at rock formations that resemble almost everything. There are dragons and people’s faces and turtles and Nón lá (the traditional Vietnamese hat) and squids and pretty much every conceivable shape there is. The place was pretty big (and crowded!). It also includes a pretty tiring climb but I promise you it’ll be worth it. There’s also a viewing deck that will give you a pretty good view of Halong Bay and the nearby city. Which is kind of baffling because ha, suddenly there’s a city? Anyway. 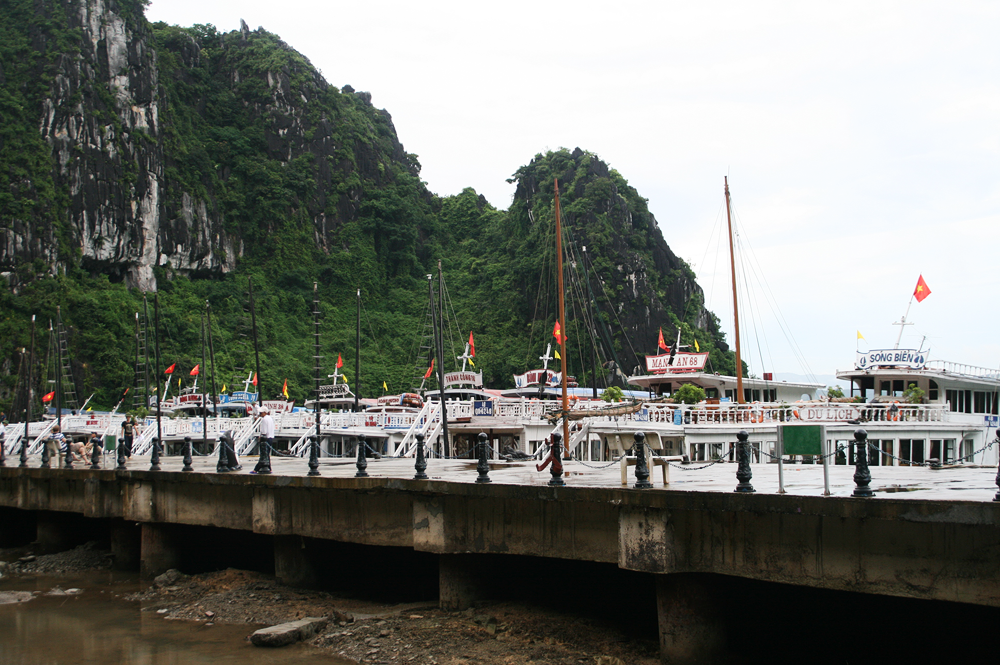 By the time we got back on our trip, the clouds were disappearing. The sun decided to show just when we’re ready to go home! Boo, sun. Seriously, though, I actually prefer the gloomy weather because at least we didn’t have to shield our eyes from the sun all day. There was also a nice breeze blowing throughout so yay.

For the remaining time, we had a great view of the sun setting and quaintly glinting over the water. So yes, it was a pretty awesome trip, definitely worth the 8 hours of sitting on my ass. Hahahahaha. Ha.

Seriously though, don’t miss out on the Halong Bay when you go to Hanoi.